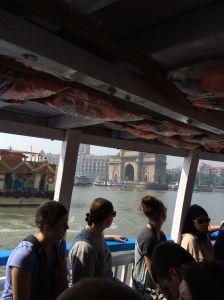 Part 1 in a series, #returntoindia It took two or three months for an English merchant to reach India, just one hundred years ago. Approaching from the west, through Bombay, their first sight of the subcontinent would have been the Gateway to India.

A Roman triumphal arch with elements of 16th century Muslim and Hindu architecture, the gateway was built to commemorate the 1911 visit by King George V, who only got to see a cardboard replica since it was not finished until 1924. Less than 25 years later, in 1948, the Somerset Light Infantry passed through the gateway in a ceremony marking the end of the British Raj.

This symbol of colonial power merely marks a brief transition in a country that measures its history in millennia. Today you can get to India from Chicago in about 20 hours, with, in our case, a short lay over in Qatar. Your first glimpse is a modern international airport, with long lines for immigration. You pass through customs and step out into the warm night air—bombarded by the sounds and smells of a busy tropical city.

But the distance between the U.S. and India is not measured in months or miles—it is measured by ways of life layered over centuries and centuries. I missed much of this on my first trip, in January 2014. And I missed much of this on my second visit, just completed in January 2015. But I noticed some of it. And that’s what I want to write about this month.