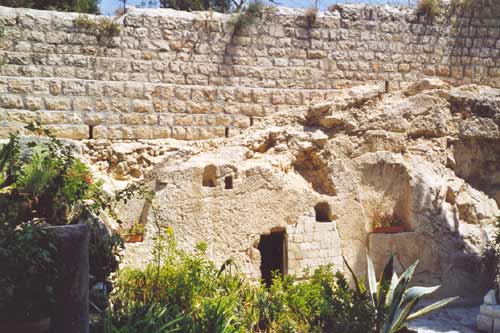 On the evening of that first day of the week, when the disciples were together, with the doors locked for fear of the Jewish leaders, Jesus came and stood among them and said, “Peace be with you!” After he said this, he showed them his hands and side. The disciples were overjoyed when they saw the Lord. Again Jesus said, “Peace be with you! As the Father has sent me, I am sending you.”
John 20:19-21

The end of a sonnet cycle on the seven sayings from the cross.

Mary ran to Peter and to John
to report the empty sepulcher and theft,
and though John ran the faster of the two,
he paused outside, perhaps to catch his breath.
He wondered at the folded linen strips,
but Peter came and boldly blundered in;
John joined him and they stood in silent awe,
uncertain where and how they should begin.
That night, with all the rest, they locked the doors,
but Jesus came and stood there in the room;
“Peace,” he said. Although my wounds are real,
it is time to celebrate the empty tomb.
Then he gave them, and us, a job to do:
He said, “As I was sent, I now send you.”

3 thoughts on “coda: a word of responsibility”