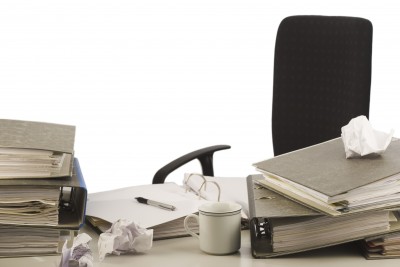 I won’t have to clean my desk over spring break.

explores “The Hidden Benefits of Disorder – How Crammed Closets, Cluttered Offices, and on-the-Fly Planning Make the World a Better Place.”

I’m very relieved. Rebecca, a former student picked this book up and recommended it. “I would rather reinforce my messy behavior than stress myself out by trying to fix it,” she says. “Turns out, the authors were all for that.” The book confirmed her “long held belief that being organized wastes a lot of time.”

It’s so much simpler to just close the door.

Not everyone is so sure. The book only gets 3’s and 4’s on ratings like Goodread and Amazon, but of course they let the neatniks vote. Conner, whoever he is, says, “For being a book about the ‘hidden benefits of disorder’, the authors seemed to have gained none of them while writing such a poorly organized and presented book.”

I think he is just bitter.

The author, Eric Abrahamson, is the youngest ever full professor of management at Columbia University’s School of Business.

Sure, he’s young. But I’m pretty sure I would rather have lunch with him than Conner any day. He even wrote Change Without Pain

. Pretty much impossible, of course, but you have to admit this guy knows how to write a book title.

I can probably write a book myself with all the time I’m going to save. I was thinking maybe How to Fake ADHD.

But instead I’m going spend the time reading Organizing for the Creative Person: Right-Brain Styles for Conquering Clutter, Mastering Time, and Reaching Your Goals

Nels Highburg, reviewing for the Chronicle of Higher Education, says this book helped him understand why desk drawers are evil. And he is absolutely right. How can you think about it if you can’t see it?

bit, but David Allen has nothing on these guys. Except maybe a name you can remember.

The whole world of color-coded folders is not for me. Only touch a piece of paper once? Seriously?

If I didn’t touch a piece of paper ten times I would never know where it was.

8 thoughts on “(spring) cleaning my desk”