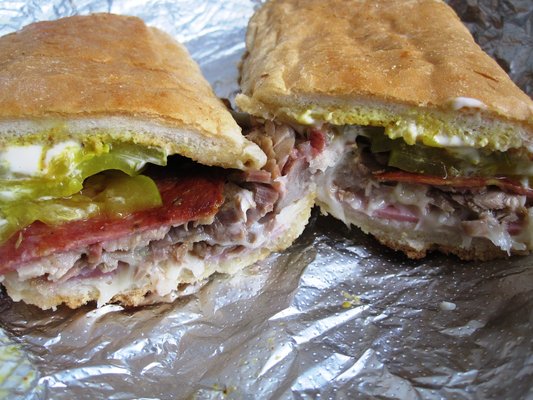 Katie was away today so I made myself a sandwich for lunch. Sort of.

Actually I make lettuce wraps these days, since it helps control my blood sugar. But I have reoccurring fantasies about my favorite sandwiches.

I’ve been thinking about this because I saw a banner at Meijer’s yesterday that says “it’s not just thinly sliced deli meat, it’s the beginning of a perfect sandwich.”

But here, in no particular order, are my nominations for the perfect sandwich: 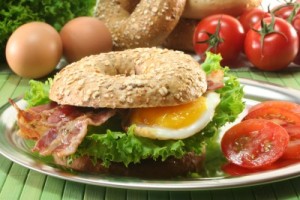 Yes, fried egg, with variations on the theme. Mine is basically a BLT with a fried egg, but you have to start with good, lean, thick bacon.

After you slather some mayo on some toasted sour dough bread you put down a piece of romaine lettuce, a sandwich-sized dill pickle slice, a layer of mild, semi-hard cheese (I favor Jarlsberg), three or four pieces of bacon and the egg.

The egg is not just added to the sandwich. It is the sandwich, fried in the grease from the bacon, with a broken yolk, but not quite firm. A slice of tomato is great. Make sure you put mayo on the top piece of bread too.

(The best egg sandwich in film, by the way, is about two thirds of the way through Spanglish. You can see the video where world class chef Thomas Keller shows Adam Sandler how to make it on You-tube. And just so you know, I was putting fried eggs on my BLT’s long before the movie.)

This may be the messiest sandwich you ever eat. Barely a carb in it when you do it my way, between two pieces of romaine lettuce. But I’m pretty sure the fat is good for you. 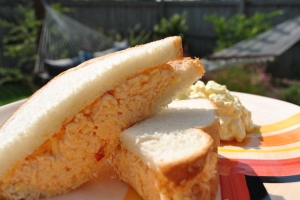 This Southern classic is one of life’s simple pleasures, often mocked and seldom praised. But it has started showing up in high-end restaurants.

My every day version is simple. I put two bags of sharp, shredded cheddar in a bowl with a large jar of pimentos, a cup or more of mayonnaise, and a big, heaping tablespoon of horse radish sauce. Mix it all up and you’re done.

It is served on the least nutritious white bread you can find, with the crust cut off just in case someone is trying to slip you some vitamins or something in on you. In my case, celery works just fine, although I do use Wasa crispbread some times. Open face.

My company version includes cream cheese (see the recipe on Forkinit), as do most high concept versions that use fresh roasted red peppers chopped fine instead of the canned version. At the Van Horn Sandwich shop in Brooklyn, New York, they serve a BLP (bacon, lettuce and pimento) sandwich, which proves you can experience heaven on earth.

And if not on earth, perhaps in Cuba where I hope to have a Cuban Sandwich before I die. Actually I may have to wait for heaven on this one, since it is kind of hard to do on a leaf of lettuce.

This is sort of the original Panini, made of grilled, hard-crusted bread, stuffed with ham, pork, Swiss cheese and sliced pickle. Yes, mayo. And a little mustard.

Although I grew up with the South Florida version, my favorite Cuban sandwich comes from a little lunch counter just off Times Square called Margon. If you go there, eat there. It’s only open for lunch and it will be the best six bucks you ever spent in your life

So that’s my nominations for the perfect sandwich.