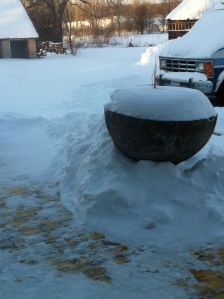 The Midwest is buried in snow, immobilized, recovering from a storm of historic proportions. I know, because I read about it on CNN.com.

I didn’t experience it, however, after about four days in which we all prepared. Lines at the supermarket were long, and the kids all looked forward to, and had, a snow day. People were out buying generators. I even bought a pack of D-batteries and filled a few bottles of water in case we lost power.

We didn’t. As far as I can tell, no one did. It was not “the end of the world as we snow it”, despite what it said in the newspapers. Not here anyway. In Chicago, maybe. My son’s car was buried.

We did get six to eight inches of snow, and quite a bit of blowing and drifting. We have a long country driveway, and I couldn’t get out until our friend John Bailey came by with a plow. I shoveled the porch and sidewalk, but while it was deep it was also light and fluffy. No heart attack here.

Technically, it may have still been a blizzard, which is more about wind and visibility than it is about snowfall. But it blew through at night so I don’t know if you could see a quarter of mile or not; it was dark and I was asleep, which seemed like the sensible thing. I lived though it, though, and that makes me an expert. So here are my tips on how to survive a blizzard.

Turn off the TV. The expectations created by the media, which needs to sell papers after all, are always a little hyped. Talking heads on TV repeat the same things for days, finding footage of past storms and interviewing experts who no one would normally listen to. While the weather service will err on the side of caution, the media will err on the side of sensationalism.

Shop early. Seriously. The stores are crowded before a storm and crazy before a blizzard. One tweet I saw was a guy at the store buying jerky and ammunition. But even if you just need a gallon of milk, you will be in line with the guy who bought the last snow shovel in the county.

Eat soup. A nice pot of homemade soup on the stove is an antidote to the frenzied anxiety of the newscasters and ammunition buyers. A cup of tea will go along way too. Something warm is comforting. Something slow is better.

Have fun. As a local columnist puts it: “Alarmism is not the main reason for pre-storm hoopla. The main reason is popular entertainment. It’s entertaining to live through an adventure instead of a winter.” Even if it doesn’t come, it’s more interesting than another gray day in Michigan. You might even get the day off.

I tried, but called into an hour and a half phone conference instead. Answered some email. But I’m still sitting here in my pajamas so that’s something. Plus we got to imagine a blizzard without having to actually go through it. It’s like the best of both worlds.

Actually, as a fifth generation Floridian, I prefer a hurricane for excitement. You can be sure the lights will go off, and there will be mangos and coconuts blown out on the streets from your neighbor’s yard.

And you won’t have to shovel the snow.

5 thoughts on “how to survive a blizzard”