I’ve referred to the parrots here, as a trope for the slightly exotic character of our surroundings. But I wouldn’t want to leave the wrong impression.

I get a sense that the parrots are a nuisance bird. I got that impression when Ivan bought me a sling-shot the second day we were here and wanted me to bring it to Santa Rosa.

There are dozens of them in the nearby trees, with large thorn-infested nests high in the trees. The thorns drop on the ground, catching on your feet or spouting troublesome bushes in your yard.

And the chatter is incessant. Sometimes it’s like trying to rest with a cement mixer outside your window, although the cement mixer is more melodic.

And dogs? Now that’s another story. They are everywhere. There are three of them sleeping on the porch right now and we have no idea who they belong to. 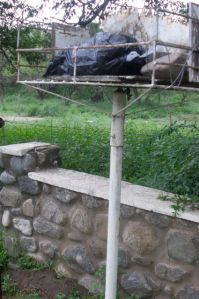 The dogs are gentle enough. I’ve not had a dog so much as growl at me the whole time we’ve been here, even though they roam the streets in packs and every walled and gated middle-class home has one or two in the yard to bark at you when you walk by.

Someone should write a book about Argentines and their dogs, although I doubt if anyone ever thought of it. They are as ubiquitous as the air. It’s the end of compost as we know it.

It’s the end of trash pick up as we know it too. Every home has a bin for garbage, mounted on a pole. And we still pick up the scattered trash almost every day. Who would have thought that a dog could climb a poll? Or maybe it’s the parrots, after all.

But when I grow up to be president of Argentina, there’s going to be a leash law. Either that, or everybody gets a sling shot.