Monday night we will host our annual St. Nicholas Eve celebration, with about 70 friends and family. We’re looking forward to it, a delightful evening with good food and fun for children of all ages.

But how did the son of a Baptist preacher end up celebrating the feast day of a 3rd century Greek Orthodox saint? Two reasons, really. Or at least two you are likely to believe, and one that’s a little more esoteric. Here’s the ones that seem practical: 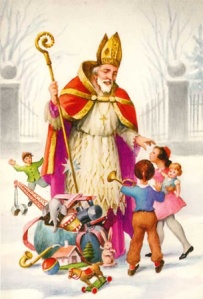 To demystify Santa.
Sure, he is a modern commercial icon. But it helps to remember that the original version was a real pastor who some 1700 years later is remembered for his kindness to children and strangers (He died December 6, 343AD). Psalm 112 says good will come to him who is generous and lends freely. Such a man, the Psalmist tells us, “has scattered abroad his gifts to the poor, his righteousness endures forever.” It’s good for kids to know there was such a man, and for adults to want to be such a man. To the degree people think about an ancient pastor who went around doing good deeds in secret when they think of Santa, our St. Nicholas Eve celebration will be a success. And to the degree they are encouraged to do likewise, as our Lord taught, all the better.

To give Santa his day.
Given that in our culture Santa has become synonymous with Christmas, we like the idea of moving the focus on him up, away from Christmas day itself. People are going to think about him and talk about him. But we want to do it earlier rather than later, clearing the way on Christmas to focus on the Christ child himself. Since St. Nicholas was imprisoned for his faith, since as a young he traveled to Israel to follow in the Lord’s steps, and since he gave away his family’s considerable fortune to minister to others, mostly in secret, we think he would approve. Actually, we think he would prefer not to be noticed at all. But Psalm 112 tells us such a man’s reputation “will be lifted high in honor.” So we will give him his day on the 6th, so we can be more careful to worship his Lord on the 25th.

And the other reason? Well, because imagination and mystery are given short shrift in our lives, and I think that they deserve more attention. When you put the two together, one possible outcome is fantasy—a unique and viable way to think about things that really matter. Like, in this case, generosity and surprise. It’s only one way to thing about them, so course. But it’s a delightful one.

So, relax. Have fun. Santa Claus is coming to town.