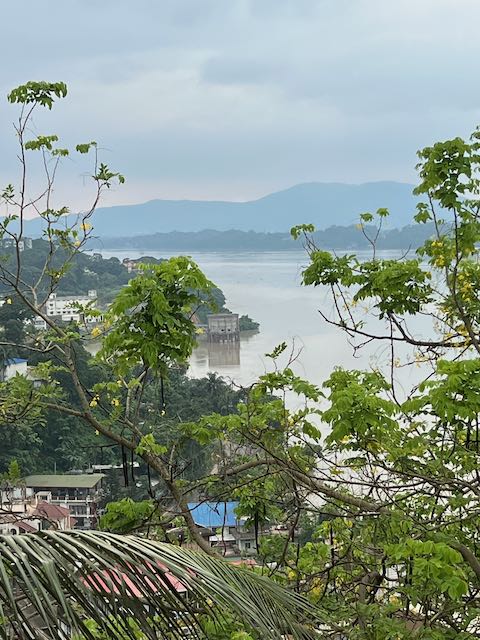 Near the end of our recent trip to Nepal, we took a few days to visit some friends in northeast India, in Assam. It was hot and muggy, but we were delighted to spend time with our friends. And Assam itself was lush and green and beautiful.

The monsoon rains had begun, and there was flooding in some areas. But our time in Karbi Anglong was filled with laughter and new friends. Our last night we stayed in a Catholic retreat center in Guwahati, with a magnificent view of the Brahmaputra River (pictured).

Of course, we had to get to Assam from Kathmandu and flew through the New Delhi airport. Three of them, actually, since the international terminal and the two domestic terminals are all in separate buildings.

Let’s start by observing that three hours is barely enough time to make a connection. I should also add, having traveled in Southeast Asia several times with groups of college students, that the airports are easily the most stressful part of the experience.

This transition started out well enough. We were off the plane quickly and immigration was quick and painless, although we walked a long way to get there. Considering how long we walked, it was surprising that our baggage was not at the baggage claim. We had to pick it up, take it through customs, and carry it to the next building, about a 20-minute walk.

Then things got hectic. Security in India is handled by the army, and customer service does not appear to be part of their training. Generally, Asians also have a poorly defined sense of a queue. There is a lot of pushing and shoving and cutting in line. And everyone was taking stuff out of their carry-ons and putting it in tiny little bins to pass through a scanner.

We were expected to put shoes, belts, wallets, and electronics in small trays, the normal stuff. But we were also instructed to put any connectors for electronics—cables, chargers, earphones, etc. into the little bins. If they saw something suspicious, they sent you and your bag back to go through security again. They don’t actually say what they are looking for. So, you take a few more things out of your bag and put it into the little trays, hoping you found the right stuff.

This happened to me twice, and by the time we repacked our bags, one of our bins were buried under a mountain of other bins and our plane was already boarding. So, we rushed to the gate, and after we took off I discovered my bag of cables and connectors, my laptop charger, our charging block, and my Beats headset were still in security.

It would easily cost me $200 to replace everything. So, I did what any sensible person would do and emailed lost and found after we landed. The next day I got an email saying they had recovered everything, and we picked it up on our way back through, when we had a 5-hour (and much more leisurely) lay over.

Here is my advice:

Give yourself plenty of time. An extra couple of hours enjoying a meal in an airport restaurant is always preferred to a forced march under adverse conditions, dealing with people who don’t speak your language when they are not at work. I’m not saying they should—just that it adds to the stress.

Expect the unexpected. Security protocols differ. Airline counters have different policies. When we checked in for our return flight, the woman insisted we provide documentation of our apartment arrangements in Kathmandu. We’ve never had any such documents, and she finally just let us board. Just take a deep breath and make sure you have time to manage the unexpected.

Pack light, especially your carry-ons. Put anything that might arouse the interest or suspicion of bored Indian soldiers in your checked bag. It’s easier that way.

Don’t lose hope. A very nice young man brought us our stuff from lost and found. We didn’t even have to go back through security. No one is trying to keep you from flying, even though not everyone is trying to help.

Everything is evolving. Actually, I’ve seen worse. Immigration at Delhi was much improved. Facilities at the airports in Kathmandu and New Delhi have improved every year we travel. Service will get better too.

Airports are stressful. International airports will be more stressful. Usually. Qatar Airline’s airport in Doha may be the finest airport in the world. But even there, 3 hours may not be enough time for a transfer.