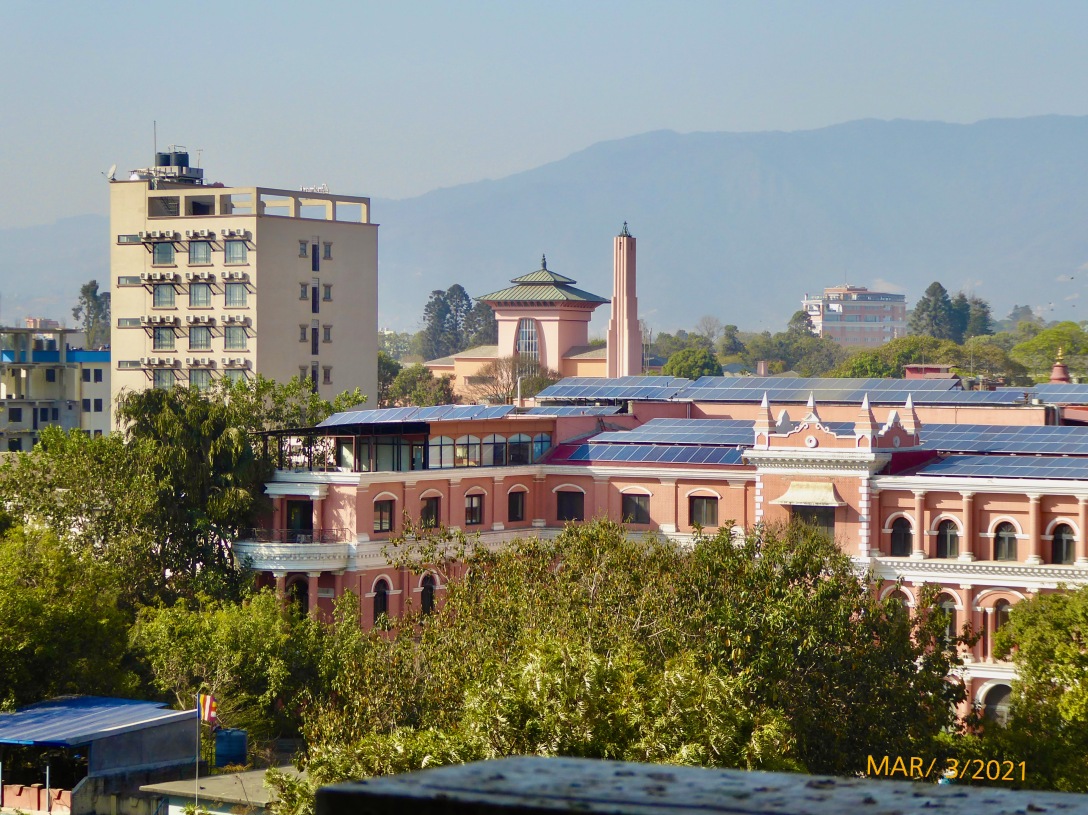 Cover photo—A view from my office in our apartment. The pink building in the foreground is a casino associated with a Hyatt Regency. The square tower and spire in the background are part of the Narayanhiti Palace.

From my office window, I see the spires of the Narayanhiti Palace a block or so away. Katie and I walk around the palace grounds a couple of days a week because the sidewalks around the walled complex are wider than most, and probably better too. It’s about two miles.

The palace is named for the Narayanhiti temple on the grounds, comprised of root words that refer to Vishnu, a prominent Hindu god, and a fountain or water spout. It’s a museum now, the last home of Nepal’s monarchy which ended in 2006. Built in 1963 by King Mahindra, it is known in Nepali consciousness as the site of a massacre where King Bihendra and his queen, along with several other members of the royal family, were murdered by the crown prince in 2001. They had refused to let him marry the girl of his dreams.

Or so they say. This is, as you can imagine the source of as many conspiracy theories as there are about the 2020 U.S. election. The last King, Gyanendra, vacated the palace in 2008. But the murder, and the conspiracies, are apt metaphors for the recent history of the country, marked by tumultuous and tenuous progress toward democracy.

After political activists replaced a hereditary prime minister with an elected one in 1958, in 1960 the king instituted a party-less “guided” democracy where no one was permitted to criticize the government. He banned an emerging multi-party approach and jailed party leaders. The first of several “people’s movements” led to a constitutional monarchy by 1990, but this didn’t work so well, and in 2006 another people’s movement resulted in a 19-day protest that finally overthrew the 200 year-old Shah monarchy.

Did I mention this all took place against the backdrop of a civil war led by Maoists that claimed about 17,000 lives between 1996 and 2006? And that they have had 11 prime ministers since 2008? Or that the current prime minister dissolved parliament after his party split, but it was restored by the Supreme Court last month? Or that they have had several constitutions, the current one dating from all the way back to 2015? Or that all this takes place in a culture with deeply embedded traditions of political and economic patronage?

I read three fairly partisan newspapers every day and I can’t keep up with it, as parties angle for a role in a new government, demonstrators close down the streets to show support or opposition, and people talk about politics all the time. It’s messy. They just restored a political party that had been banned for blowing up cell phone towers.

Frankly, it’s hard to read the aspirations of the Nepalese people. I can’t yet tell what people want and how badly they want it, at least not politically. Perhaps they just want the roads repaired and the electricity to work all the time. I’m sure they want good jobs so their young people don’t all want to leave the country and work in the Mideastern oil states.

I’ve only been here a month, and the political impulses are diverse and passionate—I even saw a small demonstration favoring a restored monarchy. But there appears to be a commitment to forging a path forward, with all the messiness that entails, toward federalism and pluralism. And hope.

About a decade after the Shah dynasty began, on the last day of the U.S. Constitutional Convention in 1787, Ben Franklin was asked if they had come away with a monarchy or a republic, and he said, “a republic, if you can keep it.” In the United States we have been practicing a long time, and it’s still messy.

I hope the Nepalese can keep theirs, too.