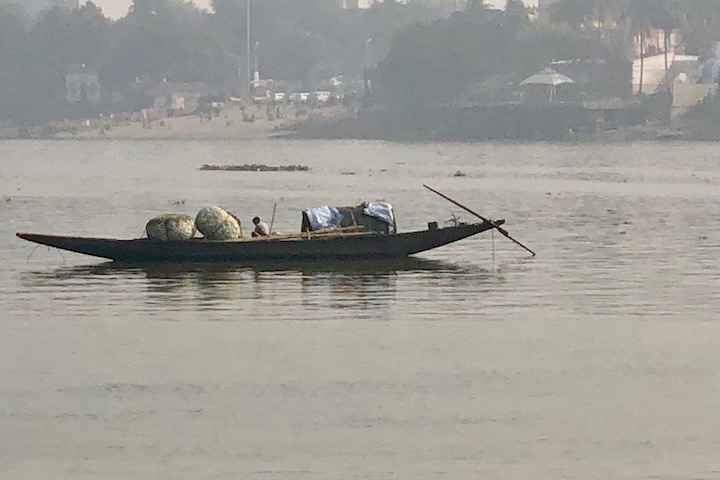 Keep a-movin, Dan, dontcha listen to him, Dan
He’s a devil, not a man
And he spreads the burning sand with water

Dan, can ya see that big, green tree?
Where the water’s runnin’ free
And it’s waitin’ there for you and me?

I brushed my teeth the other day, and rinsed my toothbrush in the sink. I was very aware that I was not using bottled water to do this, which I had for 3 weeks on a recent trip to India. Here in the United States, we take potable water for granted, and while not everyone at every time can trust their water (think Flint, MI), we take safe water as the norm, and not the exception.

We take the abundance of water as a norm as well. And the temperature. I’m thinking of long hot showers, which I missed when I was traveling. I find myself aware when the tap water in the bathroom at Kohl’s is cold while at Costco it’s warm. Isn’t hot water a constitutional right? You would think it should be in the Bill of Rights.

I jest, of course. But this is not, as we often say, a First World problem. It is a heart problem, an inability to be aware of our blessings and be grateful for them. One of the students traveling with us grasped this when he saw the older couple who hosted his homestay in Darjeeling carry jugs of water up the mountain each morning. So, that’s why he couldn’t take a shower each morning. He was at once humbled and grateful, which is the sort of moment a cross-cultural trip for university students is supposed to elicit.

Clean, reliable water is only one of the many things we expect without appreciating how rare they are. I come home and find myself grateful for thick mattresses and warm houses and even fast food, or at least practically endless culinary choices. But water is the main one.

I’m not saying that we never experience draught and shortages. I’m saying we don’t generally experience deprivation and disease because of it, as much of the world does. According to the Water Project, “half of the world’s hospital beds are filled with people suffering from a water-related disease. In developing countries, about 80% of illnesses are linked to poor water and sanitation conditions.” That’s why I never drank water on the whole trip that didn’t come from a sealed bottle.

I met a civil engineer on a train in Bengal once who had lived in Arkansas for a while. Returning home to work on the problems facing Kolkata, the thing he spoke of was the dependability of water and electricity that he had experienced here in the states. You can’t fully appreciate something until you don’t have it any longer.

And while here water is cheap, it is something we value. (Value and price are not always related.) We expect, for example, whole bodies of water to be clean, safe and fishable—which is not true of the Hooghly River in Kolkata, for example, a part of the “Holy” Ganges. According to the India Journal of Applied Research it is “ecologically stressed,” meaning it “is facing the adverse effects of rapid urbanization and industrialization especially due to the massive discharge of domestic and industrial effluents directly into the river in addition to various agrochemicals through surface water runoff.” Our guide tried to tell us it was safe to eat the fish—but I wasn’t buying it. And even he wouldn’t swim in it. The Ganges is the sixth most polluted river in the world, and 1/3 of India’s urban population lives along its shores.

Clean, life-giving water, however, is what we need, even if we are completely unaware. It is the “nectar of the gods,” as the Greeks called it. It is why Jesus calls himself the living water. It is why pastoral images of resting beside flowing streams and deep ponds represent peace and security. It represents a greater need for that which is deep and clear and pure. The danger, to mix the metaphors a bit, is that like Nolan’s mirage-addled cowboy, we might plunge ourselves in the Hooghly.

Clean water is a reminder, each day when we turn the faucet at our sink, that we are truly blessed.

1 thought on “what we have. and desperately need”