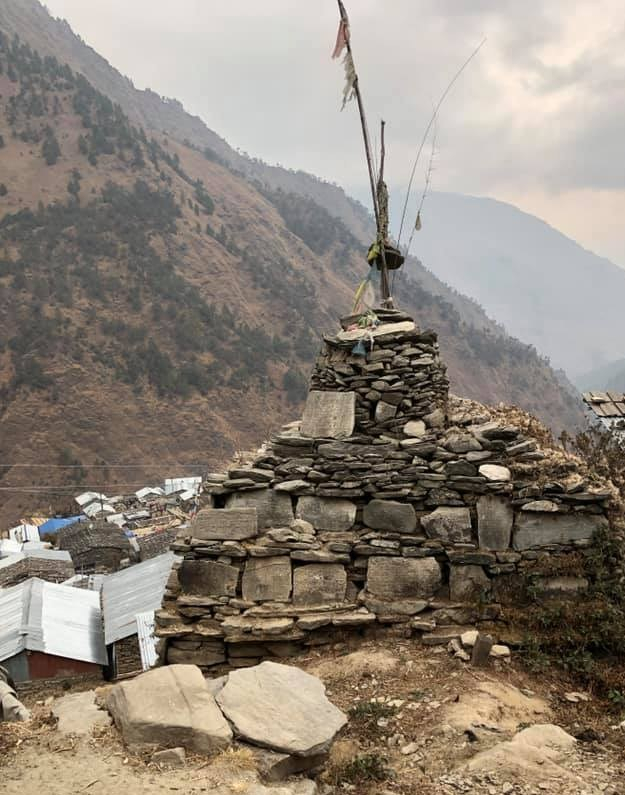 [1] I lift up my eyes to the hills.
From where does my help come?
[2] My help comes from the LORD,
who made heaven and earth.

[3] He will not let your foot be moved;
he who keeps you will not slumber.
[4] Behold, he who keeps Israel
will neither slumber nor sleep. 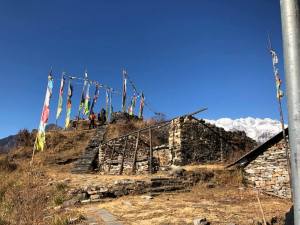 On our first day out, on a five-day trek in the lower Himalayas with 17 students from the university where I teach, I heard the young woman in front of me scream, and looked up to see a water buffalo charging down the path toward us. “Get off to the side” I called, realizing immediately that I had failed to say which side. But she knew, of course, and leaned into the embankment on our left, and away from the ravine on the right.

Trekking is dangerous, and not all of the danger results from risk-taking selfies. We share the trail with sheep and other livestock, none of which are interested in our welfare. Steep inclines and loose stones are everywhere. So we enforced a strict “no horseplay” rule, and it had nothing to do with horses. A couple of times my wife and I were even a little picky about which side of the trail the group sat to rest. I was afraid of one of us falling off the mountain, and every trekker does well to think about that too.

According to Psalm 121, Hebrew pilgrims who had set out toward Jerusalem faced similar dangers, including falls (vs. 3), sunstroke, and even lunacy (vs. 6). They also were thinking about safety, so the songwriter assures them they will be safe. In fact, he says, “He (God) will not let your foot be moved.”

What does this mean? By the third day, on the steep descent toward Thuman, my wife Katie and I both fell more than once. Fatigue and gravity still mattered. In fact, we had to have one student air-lifted off the mountains in a helicopter when she became too dehydrated to continue. Is this Psalm, or any Scripture, a promise that we are beyond human failing and limitations? Of course not. No thoughtful Christian can make this case in any serious way. That’s certainly not what this Psalm is about.

To understand Psalm 121 you have to start at the beginning. What would the pilgrims have seen when they lifted their eyes to the hills? They would have seen roughly the same things we saw in Nepal— Hindu shrines and Buddhist stupas and prayer flags. Similarly, the mountains around Jerusalem were “high places” where the idols and altars of Baal and other false gods were prominently displayed.

From this perspective, “where does my help come from” is not mere sentiment about how beautiful the mountains are or how big our God must be to have made them. It is a question about false hope answered by biblical truth: “My help comes from the Lord who made heaven and earth.” Unlike Baal in Biblical times or countless capricious and even malevolent Hindu deities, the Lord will “neither slumber nor sleep.” This is a truth we need when we set out on pilgrimage.

Further, He is our keeper, or guard, and Psalm 121 says so several times. This is not a Psalm about falling down; it is a Psalm about a personal, involved Jehovah who watches over us. Within the context of His caring providence, His children will not stumble or fail, spiritually or eternally. He is our shade on our right hand. Unlike the stone gods on the hills, or the false ones in our hearts, this gracious Sovereign “will keep you from all evil. He will keep your life. He will keep your going out and your coming in. “

This security sustains all true pilgrims: my help comes from the Lord.

He will neither slumber or sleep.

1 thought on “where pilgrims look”