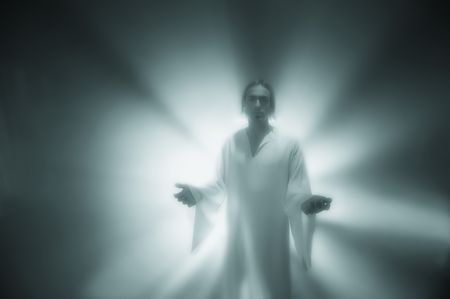 “And suddenly there was with the angel a multitude of the heavenly host praising God, and saying, Glory to God in the highest, and on earth peace, good will toward men.” Luke 2:13–14

Like most of the old hymns, “Hark the Herald Angels Sing” tells us things about God, not about ourselves or our needs. What will the shepherds see when they get to the manger?

Veiled in flesh the Godhead see
Hail the incarnate Deity.

Throughout this hymn we are reminded of who He is: new-born king, everlasting Lord, Emmanuel, Prince of Peace, Son of Righteousness. Glory to the newborn King, indeed. The song also revels in His work: reconciling sinners, bringing light and life. There is healing in His wings.

The old songs of the church were less self-absorbed than many worship songs today, more theological than sentimental. Some songs we sing in church today never mention God at all, and often feel like teenage love songs.

Christmas songs in particular have been softened, sentimentalized and secularized, more jingle bell than Noel. We seem to always be tending toward velvet mini-skirts and playful snowmen. So it’s good we have the old carols to remind us of what it all meant. And still means.

Mild he lays His glory by,
Born that men no more may die;
Born to raise the sons of earth,
Born to give them second birth.

This is good to know. And to contemplate. In fact, the glory of the new born king is so important to Charles Wesley, the author, that he doesn’t even mention the angels’ audience, a rough assemblage of low-life shepherds, the social outcasts of their time.

Today we would make them, and by extension us, the stars of the show, the human interest angle that boosts ratings. Producers would be wanting to know who these men were, where they came from, and how their lives were changed by this angelic visitation.

But that’s not the goal of this song, which properly points us to the King and not His subjects. It is not so much about what we need as who He is. Glory to the newborn King. That’s the point of the song. And the story.

You don’t have to be an angel to see it this way. Yes, He is “by highest heaven adored,” but he was “pleased as man with men to dwell,” and thus became “Jesus, our Emmanuel.”

Certainly we need all that He offers, but Christmas should remind us first of who He is. So:

Joyful, all ye nations rise;
join the triumph of the skies—
with the angelic host proclaim
Christ is born in Bethlehem.

———————————–
The words to “Hark the Herald Angels Sing” were written in 1739 by Charles Wesley, whose brother John founded the Methodist church. Charles preferred slow and solemn music for his lyrics, so for at least century this song had a different tune. But the tempo was kicked up a bit in 1840 when William Cummings adapted a tune from a cantata by Felix Mendelssohn.

And on a different note entirely, yes, Mary did know.