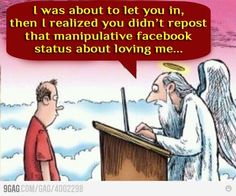 There are two particularly annoying things Christians do on Facebook.

The first involves magical thinking. It goes like this: some claim, inspirational story, witty saying, or prophetic nonsense is shared, and we all must share it if we love Jesus. If you type amen and share immediately you will get some special blessing or avoid some calamity.

If you post stuff like this, stop. The Gospel is too clear and the stakes are too high for us to be distracted by and to annoy others with this nonsense.

I like witty sayings and inspirational stories as much as the next guy. But I don’t like being manipulated by guilt or empty promises. And no one else does either. Yes, I do live by faith, but it is faith in the Son of God who loved me and gave Himself for me. And the work His Spirit is doing in me, changing me through Scripture, is more important than all I could ever gain by typing Amen on your post.

Frankly, people should know if I love Jesus through what I say and do, not through what I repost by coercion or constraint. In fact, I don’t repost such things even in the rare instances when I might believe they are true. It just looks foolish, and it is marked by spiritual pride. Nothing I post on the internet can heal you, bless you, or change you, no matter how many times you share it, repost it, or link to it. And if the Spirit of God does speak to you through something I find online, you will share it naturally and without constraint. Maybe.

And Christian’s should stop posting rumors, myths, and conspiracy theories too. That’s the second most annoying thing Christians do on social media, and much of this centers on the mistaken idea that Jesus was a Republican. Now I happen to be a Republican, and I’m a bit of a news junkie. I keep pretty close tabs on the conversations about candidates. In fact, I’d rather stay up late watching election returns than any sports competition. But you wouldn’t know it reading my social media. Christ’s kingdom is not of this world. I wouldn’t want others to think I believed otherwise.

Unfortunately so much of what is endlessly posted and reposted online is unverified, exaggerated, half-true or just made up. A pastor recently wrote a letter about how a gay man was suing Zondervan for printing Bibles because they were filled with hate speech. It was just one more example of how the Supreme Court decision about gay marriage had unleashed a wave or anti-Christian litigation. Except it wasn’t true. It had nothing to do with the Supreme Court decision, it happened years ago when George Bush was president, and it was laughed out of court. If Christians are going to post something, at least it ought to be true.

Greater is He that is in us than he who is in the world. Believe this and be glad.

You can repost that, but only if you want to.

This is the fourth in a series.