Do not move the ancient landmark
that your fathers have set.
Do you see a man skillful in his work?
He will stand before kings;
he will not stand before obscure men.
(Proverbs 22:28-29 ESV)

I managed to do the whole thing without going to Restoration Hardware, but we did save the barn this month.

And it feels good.

If you happen to have a 75-year-old glazed tile barn like we do, with black cross-tab shingles over the original cedar shakes, you know exactly what I mean. And you know what I mean even if you don’t. It’s always nice to save something.

Some friends from church helped patch the roof last year, but it was continuing to deteriorate, so this fall I hired some Amish guys to replace it. Not with cedar shakes, which they threw in a dumpster. But with shiny sheet metal that should last longer than I do.

Who knew that the Amish rent dumpsters? And who knew that they would show up with a scissor lift and power tools? But you do still have to drive 20 miles into the country to pick them up at 7 in the morning and take them home between 4 and 5, with random unscheduled detours to pick up some tool from a brother-in-law.

Milo and his son Michael, and John and his son Melvin, are hard working, soft spoken, good-natured Amish men who apparently only rent power tools and generators to work on your farm. It’s a little eerie picking up guys before dark from unlit homes, guys who call you from their barns when plans change.

But we now have a shiny new metal roof on our barn. And I can sleep at night, not feeling like I’m neglecting an historic landmark.

Nor did I neglect the galvanized sheet metal cupola on the roof. It’s an early 20th century ventilation system to carry methane out of the barn—and hold a weather vane that I have not yet replaced.

I didn’t need a cupola. I’m not sure I even need a barn. We are just simple cat-ranchers after all. But it had been there from the late 1930’s and it seems like it ought to stay there a while longer. So Milo and his men pulled it down and I had it sand blasted at North Adams Collision and repainted by Cars Unlimited.

It was an unexpected but unavoidable expense. The cupola belongs there, a symbol that some things need not change. 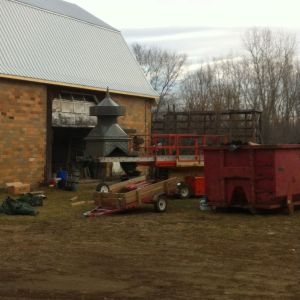 It looks fairly small up there on the barn roof, but down on the ground it turns out to be 4 foot across the bottom and about 7 foot tall, not counting the weather vane. Even after they hoisted it up on the scissor lift to the hip of the barn, it was somewhat unsettling to watch them move it up to the top and perch there, without safety harnesses, on the top of the world.

I’m pretty sure they start putting boys on ladders at the age of two or something. They seem fearless. I’m not a guy that likes to get on top of things.

I like to save things though. I’ve a very Southern sense of place. And for now, this place is my place and I hope it keeps standing for a long, long time.

Next spring we’ll get at those doors and windows.

COMMENTS: So what about you? What have you saved? Or what would you like to save? And why does it seem important? 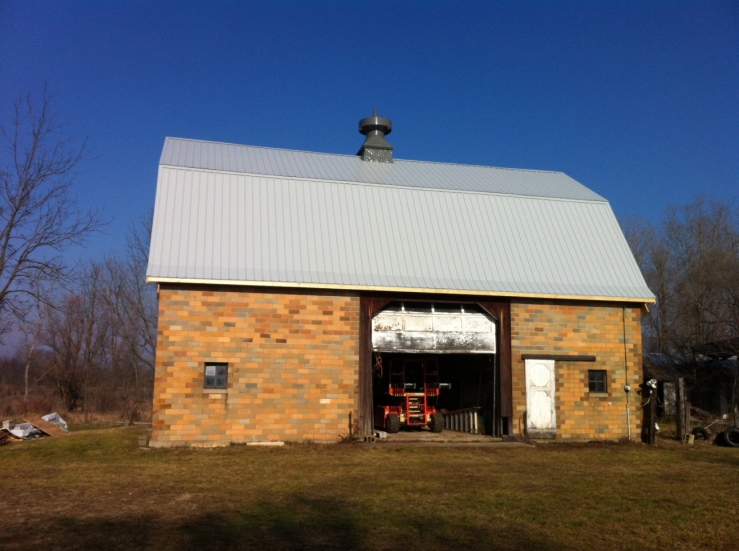 5 thoughts on “getting on top of things”