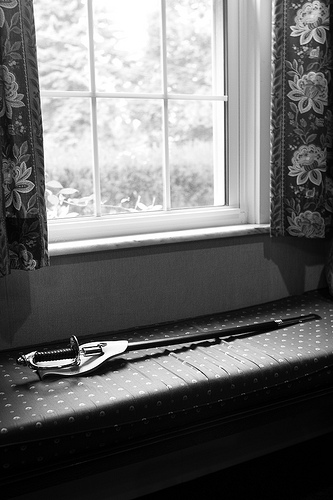 Jon, in all the weeks you and Sarah have talked with Katie and I about your marriage, I don’t think I’ve ever said anything about how much I honor your service as a Marine.

Granted, I know nothing about military service. I myself was more or less drummed out of the civil air patrol when I was 14, but I’m grateful for the sacrifices you made to serve us all.

The Marines, of course, have a well-deserved place in the American psyche, practically synonymous with honor, duty and sacrifice. You have said how being a Marine helped you grow up, to become more confident and decisive.

But you ain’t seen nothing yet. The covenant upon which you now embark requires more of a man, builds more into a man, and makes more of a man than any other human service.

A model for sacrifice

Take sacrifice, for example. The standard in marriage is higher than love of country, since the Scripture points us to how Christ loved the church and gave Himself for it. To woo his church he gave up his life, but he also gave up heaven itself.

Dying on the battlefield is no larger virtue than dying to self day after day, setting aside our interests and desires to insure a greater good. We aren’t really giving ourselves for our wives if we are not willing to do this, not for a tour of duty but a lifetime of self-denial.

A man whose sacrifices are not greater than the sacrifices his wife makes has not yet understood the example of Christ. When men settle for mutual submission or mutual sacrifice they have settled for less than what God requires of them. The church will never outdo Christ in terms of sacrifice, nor should our wives give up more than we do. Or even the same amount.

It’s not enough to be willing to die for them. We have not fulfilled our responsibility if we buy a hand gun or an insurance policy, or what ever other skewed idea we may have about how to protect them.

Instead we die daily, setting aside our own rights and expectations, focusing on how we help present them to our Father “holy and without blemish.”

A motive for duty

This is our duty, to present them in this way. Better than we found them.

Our wives should flourish because of our love. They should be more radiant and less fearful because we love them. This is not because they can’t get there without us. Many women flourish in the kingdom of God without their husband’s help, or without a husband at all.

This daily dying is our duty, since it points us, and them, toward Christ himself. And it is something we do because duty demands it, even when emotions or circumstances make in uncomfortable or inconvenient.

In fact, if it was convenient it wouldn’t be a sacrifice at all. Marriage is often the equivalent of sleeping on hard ground and eating meals out of a can. It has days, even months, of ill-conceived missions of our own makings.

But we must remain alert to danger and committed to service, because committed covenant-keeping love is the substance of which patriotism is only a shadow. For men, such love requires discipline, sacrifice and obligation, like that of a soldier.

But in marriage we add tenderness, gentleness and compassion, like Christ himself. We model Christ in our careers and our callings, but nowhere more than in our marriages.

Too long the church has focused on our authority, when what matters is our responsibility—humble, serving leadership that our wives can honor and affirm. Too long we have obsessed over a woman’s submission, rather than a man’s sacrifice and service.

In the example Christ provides, we earn respect, we don’t demand it. We treasure love, we don’t abuse it. Or ignore it. Cherish is a good, important biblical word and we must relearn it.

A means of honor

This is the only way to recover the dignity of the office we hold as husbands. In Letters and Papers from Prison

Bonhoeffer said it is “a divine ordinance when the wife honors the husband for his office’s sake, and then the husband properly performs the duties of his office.”

In a world where the office of husband (and father) is regularly mocked on television and in the movies, it is good to remind ourselves, as Bonhoeffer does, that a man’s dignity in marriage is “not in any capacities or qualities of his work, but in the office conferred on him.”

“The wife should see her husband clothed in this dignity,” he says. But for the man “it is supreme responsibility.”

Supreme responsibility is something a Marine can understand. But Christian men should understand it better.

Proverbs says that honor comes to one who is lowly in spirit. And honor comes to any man who fulfills the responsibilities of his office with such a spirit. Or to any woman, for that matter.

The office of husband is more about our heart than our headship. And we seek the heart of Christ.

No woman ever regretted being married to such a man.

No child ever resented such a father.

And no man ever regretted such a life.

———-
For other Night of Blessing essays, see

The mystery of marriage

For Jon Hoyt, on marriage

6 thoughts on “a few good men”