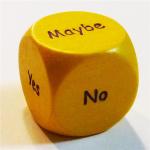 People appear to have commitment issues.

This is nowhere more evident than a Facebook invite, where the most common response is “Maybe.”

“Maybe” is short for I’m waiting to see if something more interesting or important turns up. Or it could be a way to avoid breaking promises, by not making any. Obviously it makes it harder to plan anything. At least for the guy doing the planning.

Elizabeth Bernstein’s essay on this phenomenon includes interviews with experts, like Prudence Gourguechon, a psychiatrist in Chicago, who says “It seems to be about ambivalence, but it is really about power and boundaries. Person A who says, ‘Yeah, maybe,’ essentially puts recipient B on hold. B is powerless.”

Here’s the problem with “maybe”: It means different things to different people. And something always gets lost in translation.

But the powerlessness we feel in the face of chronic hedgers is more than our frustration with people who don’t understand what rsvp means reflects.

It’s a character problem, one that says we lack courage as much as we lack commitment. We don’t want to hurt people’s feelings. We’d rather just crush them later—let them throw away food we don’t eat, or wait for us when we won’t actually come.

I have to admit I do this too much. Not so much for social events, which my wife handles for the most part. But to my wife herself. And my kids.

It’s bad enough when we do this with nominal friends, but when we do it with people we love we are of course taking advantage of our relationship. “Maybe,” in this context, is “I don’t know yet,” followed by “I completely forgot.” Except for the times it means, “I don’t care.”

At this interpersonal level it isn’t about events anymore. It’s usually about our controlling the conversation, a tactic with which some experts say men are especially skilled. Changing the topic, in this case. We avoid that which is uncomfortable and put off that which is necessary. It becomes the way we manage our children’s expectations and our spouse’s concerns.

But it’s no biblical response. “Let your yes, be yes, and your no be no,” Jesus said. “Anything more than this comes of evil.”

It’s OK to ask for time to decide. But it’s not OK to not decide, even though it is always easier. And we might as well just say no.

That’s what we mean, mostly.

2 thoughts on “maybe you should read this”