I’m not really a shutter bug, although I like the philosophy of bestcamera.com— the best camera is the one you have with you. But there are some images stuck in my head from our trip to Argentina that weren’t captured on a camera of any kind.

The first of these is a middleaged woman leaning on a cross. It was Maundy Thursday, and Katie and I had hiked to the top of the Via Crucis in Carlos Paz. She was a devout pilgrim; I’d seen her on the way up, stopping to pray at each of the stations of the cross.

I had a camera, actually, but it seemed like such a reverent moment. She would not have noticed if I snapped a photo. Or cared, probably. But she was leaning on the cross, both physically and emotionally. And it seemed so much like her moment, not mine.

A second missed photo was of seven bright green parrots perched on a trash receptacle, just around the corner from Kim and Ivan’s house in Carlos Paz. I was driving and it was just a missed moment, but the parrots had become a metaphor for our experience there: an exotic but flawed culture where flashes of beauty can mask underlying problems.

Take the Embalse Tourist Complex, for example, a lodging compound under the rule of the Presidency of the Nation. That would be a huge tourist complex built under Peron, perhaps eight 200 bed hotels that are now falling apart. The shutters are falling off and the grounds are unkempt. It’s a beautiful setting, on a 2000 acre man-made lake, but it’s also a monument to corruption and the inefficiencies of, in this case, socialized tourism. A photo wouldn’t do this justice. Just think of public housing for tourists, with a nuclear plant next door. 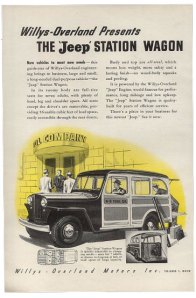 And then I never got a picture of a Willy’s Jeep station wagon, which was manufactured in Cordoba from 1956 to 1961. I’ve had a picture of one hanging in my office for almost 20 years, taken from a 1957 calendar. There are lots of old Jeeps in Argentina.

I told Katie it was a sign we had to retire there; the Willy’s wagon has always been my dream car, ever since my family owned one when I was in elementary school. (Ours went through a hurricane; after we took the engine apart and cleaned the silt out of the cylinders we put it back together and it started right up.)

I didn’t get a picture of a Jeep with a bottle on the roof either.

That means it’s for sale.

2 thoughts on “I left my Jeep in Argentina”