Valentine’s Day is one of many Hallmark holidays Katie and I tend to ignore.

I tell her I love her several times a day, and buy flowers for the house once or twice a month. It seems unnecessary to mark the feast day of a second or third century priest who may or may not have had any romantic inclinations whatsoever.

Sure, over 1 billion Valentines will be exchanged in the US. And yes, my reservations about the holiday may have as much as anything to do with memories of fourth grade long forgotten.

I still managed to become a hopeless romantic, but I prefer my words to be dearly bought and thoughtfully expressed.

This year I might succumb. It’s not because I love her more, although I do. It would be out of respect for the young people in Iran.

Huge protests are planned for Monday, February 14, in Iran, on the heel of a successful revolution in Egypt. Over 36,000 young people have already signed up on one opposition Facebook page to participate.

There’s a protest dearly bought. The opposition they face will be much more severe than that which the Egyptians experienced. 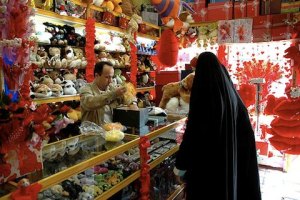 Consider, for example, that last month, the government of Iran outlawed Valentine’s Day. State radio announced that symbols of hearts, half-hearts, red roses, and any activities promoting the holiday would be banned.

It’s enough to make me buy a card.

According to Melik Kaylan, “some 70% of Iran’s population is said to be under the age of 30, so it seems natural that Valentine’s Day has caught on in a country where the young keep trying to find non-state-mandated rituals to call their own.”

They had already banned western music, women playing in bands, too-bright nail polish, laughter in hospital corridors, and foreign food recipes in state media. “Now,” says Kaylan, “the true nature of pasta as an instrument of Western subversion has been revealed.”

But such efforts are always counter productive. They have made slipping your girlfriend a Valentine Card a delicious act of sedition. It’s hard to imagine a government can survive in an age of Twitter by trying to stamp out laughter and love.

If these protests occur, I have no doubt the regime will react with deadly force. Already, since the beginning of the mid-east riots in January the government has been executing two or more “criminals” a day, including young people who took to the streets last year. It may be terrible to watch the Revolutionary Guard battle revolutionaries in the street.

But the image of some young Iranian behind a barricade with a Valentine in his pocket and a date after the riot says something wonderful about liberty and love.

And it’s cause enough to celebrate.

6 thoughts on “Why I may celebrate Valentine’s Day”